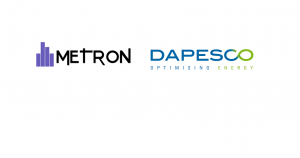 A forerunner in the field of energy optimisation, Dapesco, based in Louvain-la-Neuve (Belgium) and founded in 2002, has announced that it is joining the Paris-based group Metron, which is already active in more than 27 countries.

Dapesco, which employs around twenty people, develops IT solutions for monitoring and optimising energy consumption. These solutions are used by many Belgian players such as Delhaize, Sibelga, Ores, Cofinimmo or Belfius, but also by many sites in France and, recently, by a growing number of hospitals and schools in Canada. By combining Artificial Intelligence with automated monitoring of consumption, Dapesco is able to reduce the environmental impact of many companies, but also of public sector players. This is the case, for example, of the Compagnie du Mont-Blanc and the Liège Airport.

METRON is a French cleantech specialized in energy efficiency and improvement of industrial performance. Through its 9 subsidiaries in EMEA, APAC and LATAM, supported by nearly 150 employees, METRON supports the greening of 100 international industrial groups throughout the evolution of their digital maturity, such as Danone (200 sites) or ArcelorMittal.

In conjunction with this union of two strong players in the world of energy optimization based on Artificial Intelligence and Big Data, the METRON group announces the first closing of its Series B for 18 million euros with OGCI as lead investor, SK Gas, and its historical investors BNP Paribas, STATKRAFT Ventures and BREED REPLY.

“We are delighted to continue the Dapesco adventure with METRON, a company with which we share the same values and the same ambition to act for the energy transition. Our complementary skills enable us to make decarbonisation more accessible to all types of industrial sites. This is an opportunity for the whole team to continue working within METRON to accelerate this energy transition which is more necessary than ever“, explains Tanguy Detroz, Founder of Dapesco, who joins Metron as Deputy CEO.

For Vincent Sciandra, CEO and founder of METRON: “This double announcement is an important step in the life of the company. The entry of OGCI and the expertise of Dapesco allow us to strengthen and broaden our support for large industrial companies in the decarbonisation of their activities. Faced with the urgent need to act, the technologies proposed by cleantechs are an integral part of the energy transition and are now recognised by both investors and public authorities. This is stimulating the market and the current dynamics of French Tech are reflected in companies like METRON. In this respect, we are keeping in mind the objective announced by the President of the Republic to reach 25 French unicorns by 2025.